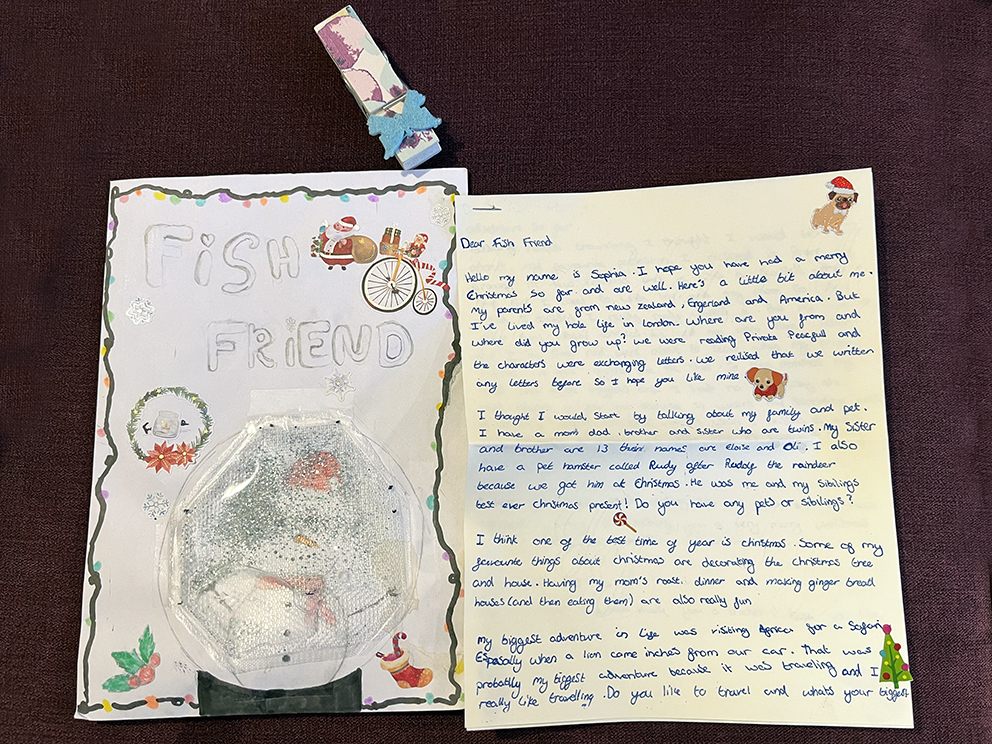 This term English teacher Ms Makris revitalised her 11s pupils letter-writing skills through a festive community-focused pen pal scheme that illustrates just why sending and receiving letters at Christmas can be so special.

One big downside of email and mobile phones is the impact it has had on traditional letter writing. When English teacher Ms Carina Makris discovered how few of her 11s pupils had ever written one, she resolved to find ways of teaching the group what makes sending and receiving letters so special and to provide them with skills to write their own. 'I felt it was important the children grasped the benefits of letters before we asked them to write one,' she says. 'That's why we looked at the letters exchanged by the characters in Private Peaceful - the book they have been studying in English this year.'

Ms Carina Makris was conscious that the best way of illustrating the power of letter writing was to make the process real and finding a solution to this sparked a brainwave that turned the project into an exciting community pen pal initiative. Before they put pen to paper each 11s pupil was given the following brief: to write a Christmas letter to one of the elderly and vulnerable people in the local Barnes community cared for by the charity FiSH.  Each pupil letter enclosed a stamped, addressed return envelope and card to make it easy for the recipients to reply. 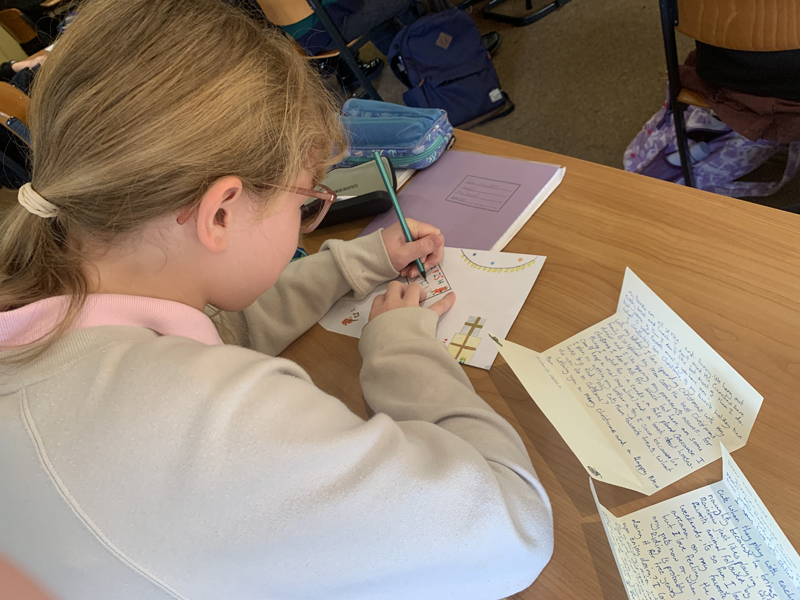 According to Ms Makris, pupils were excited and engaged by the idea. 'The children didn't know exactly who they were writing to as letters were addressed to 'a friend', so one of the things we asked them to think about was how hard the pandemic must have been for elderly and isolated members of the FiSH community, particularly during the festive season. This really appealed to their sense of empathy.'

One of the things we asked the children to think about was how hard the pandemic must have been for elderly and isolated members of the FiSH community, particularly during the festive season. This really appealed to their sense of empathy. The letters were decorated beautifully with Christmas drawings, stickers and other decorations - one pupil even went as far as attaching a handcrafted glitter snow globe to the envelope of her letter, whilst another included a gift of homemade bracelets. After the envelopes had been gathered together, six pupils – one from each English group – were chosen to represent their year group and to take the letters down to FiSH in person, below, where they met the new director Arlene, who was full of praise for their efforts. The letters were then delivered as part of a big pre-Christmas mailing to local FiSH members in the Barnes area. 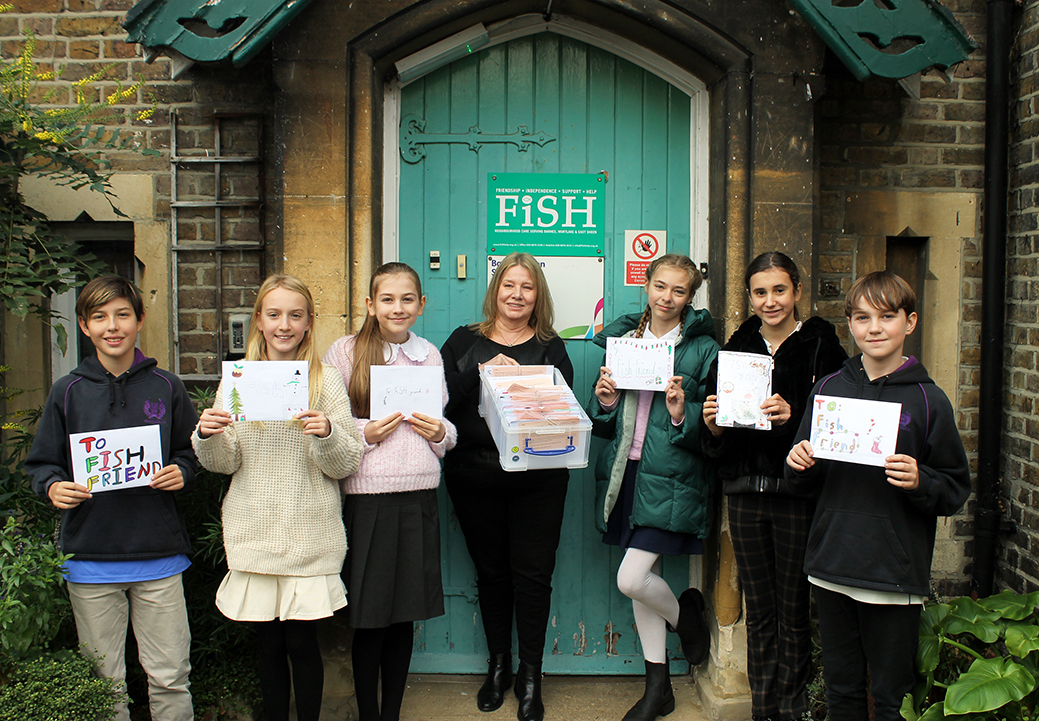 This is the second year that Ms Makris has organised this letter-writing project with her 11s/Year 7 pupils. Last year the response was phenomenal with nearly half of the year group receiving a letter or card back from FiSH users. This year's 11s (Year 7) pupils are looking forward to receiving some replies too soon. 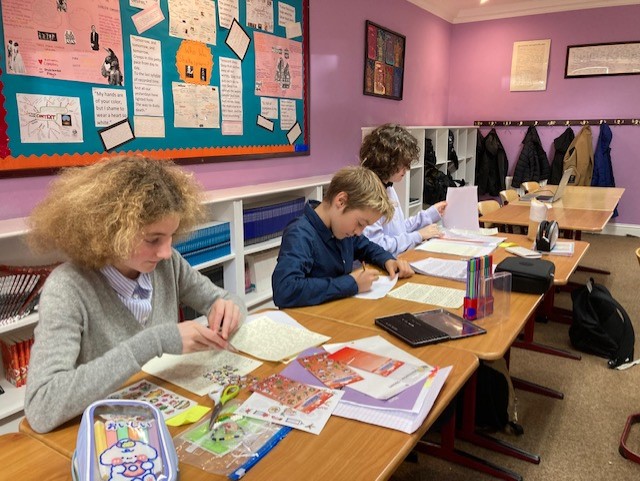 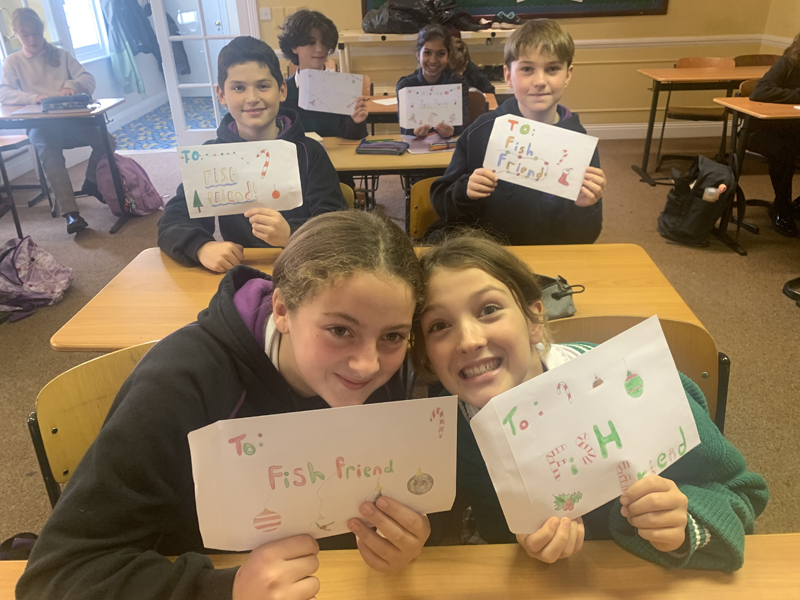 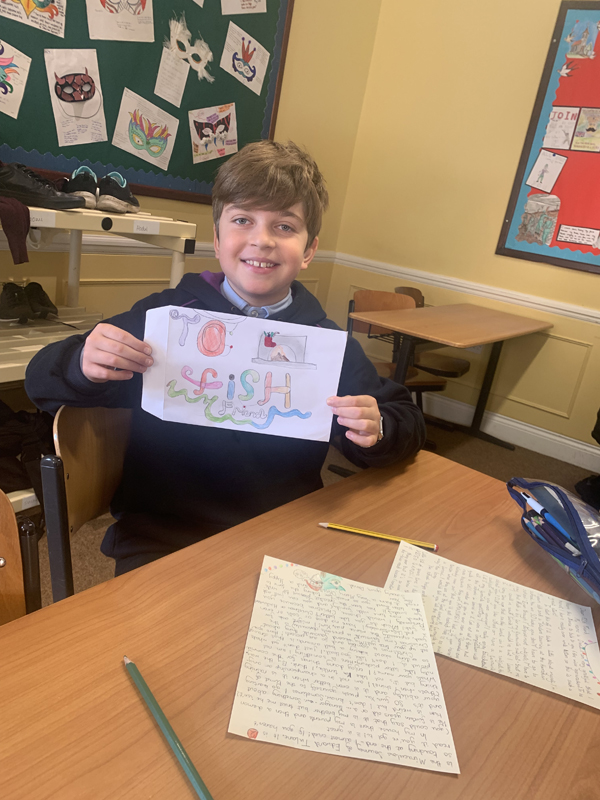 FiSH are so grateful for the efforts of our 11s children that they have not only been mentioned on social media but also by means of an article in the Barnes Bugle e-newspaper!