Four of our Upper Sixth Formers - Coco, Sonya, Xanthe and Dasha - and one from our Lower Sixth - Amber - (not just English students) took up the challenge of digesting one each of the shortlisted novels: Real Life by Brandon Taylor, Burnt Sugar by Avni Doshi, The Shadow King by Maaza Mengiste, The New Wilderness by Diane Cook and Shuggie Bain by Douglas Stuart.

They each spoke passionately about their chosen books, reading extracts and reviewing them, showing a level of commitment and quality of thought, presentation and reflection that was outstanding; as good as anything you'll hear on TV or radio!

Mark McDowall, Acting Head of English and organiser of this event, who covered the sixth book - The Mournable Body by Tsitsi Dangarembga, was particularly impressed with the way that 'all the novels engage with real world issues today from climate change to domestic abuse, racism and the effects on political corruption of personal morality.'

All five of them spoke movingly about the way the books were written and how they had responded personally to them. Sensitive, articulate, and reflective, the girls offered the rapt audience sophisticated insight into all the Booker shortlisted novels.

In the discussion and debate that followed their presentations, opinion was divided. Some agreed that Shuggie Bain is a likely winner, based mainly on the bookies' odds, whilst others prefer Burnt Sugar.  The only real consensus was that all the books seemed worthy of reading as they each explored deep, important contemporary issues in interesting, powerful ways. 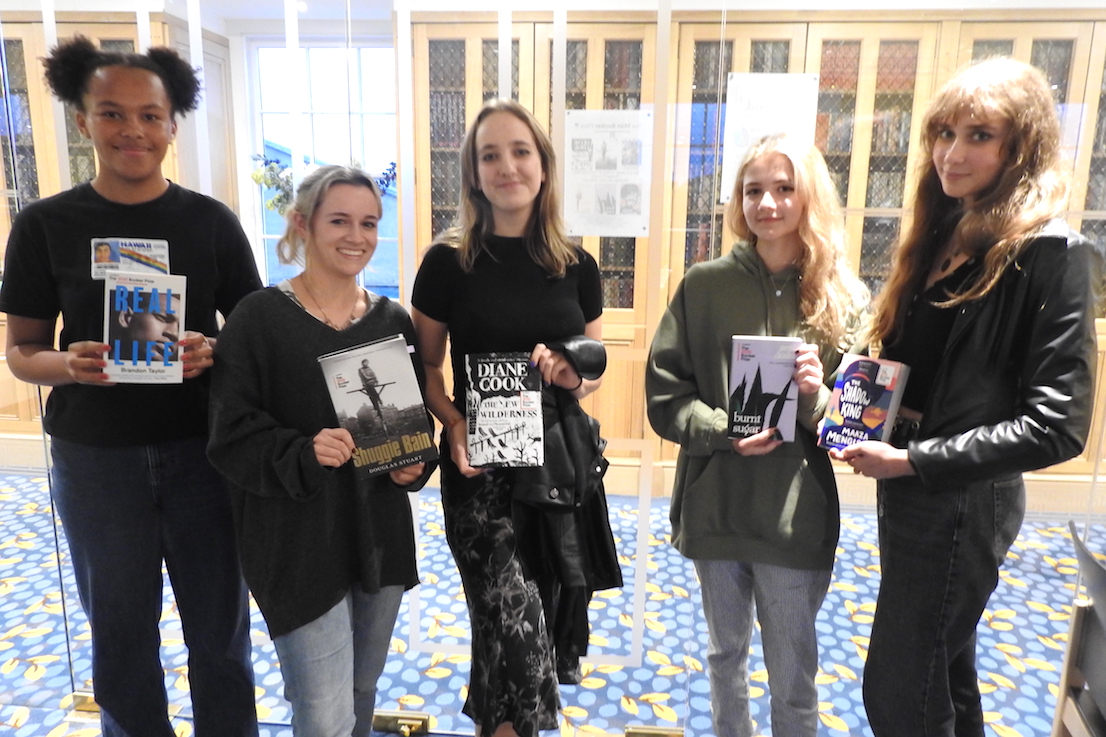 In History of Art, Ms Kroes's Upper Sixth students have also been excelling themselves. Dasha, a History of Art as well as an English student, above far right, took the initiative to enter the 'Write on Art' competition last year.

Her essay about a painting by artist and member of the Bloomsbury Group, Vanessa Bell, reviews the portrait but also challenges preconceptions. Dasha finds, in the visual representation of Clive Bell and Duncan Grant, a pair of like-minded individuals who share a deep connection, contrary to the opinion of many art critics of the time who instead branded them elitist individuals.

'Write on Art' is a prize for young art writers sponsored by Art UK and the Paul Mellon Centre for Studies in British Art. Out of 400 essay entries, Dasha was awarded runner up and received a cash prize.  She was particularly thrilled that Simon Schama, English historian and TV documentary presenter, was a judge on the panel and had actually read her work!

To read Dasha's award-winning essay on the Essential Art blog

Another Upper Sixth History of Art student, Sally, is doing her EPQ (Extended Project Qualification) on architecture and is applying to study the subject at architecture school. Her extended project is all about Sir Christopher Wren and his impact on the city of London and she will be presenting it to her fellow History of Art classmates.

Meanwhile the rest of the class has been taking part in an online Art History reading group with other local independent schools. They have been meeting fortnightly online to discuss subjects in university seminar - style. In their last meeting they debated the function of museums in the modern era.

When asked what has impressed her most in recent months about her students, Ms Kroes says: 'I have been struck by just how engaged the girls are, how much independence and initiative they have shown in their own learning and the passion with which they are driving cultural debate in the Sixth Form.'

I have been struck by just how engaged the girls are, how much independence and initiative they have shown in their own learning and the passion with which they are driving cultural debate in the Sixth Form.

Hannah Kroes, Teacher in charge of History of Art