Excursions in English: Macbeth at the Globe 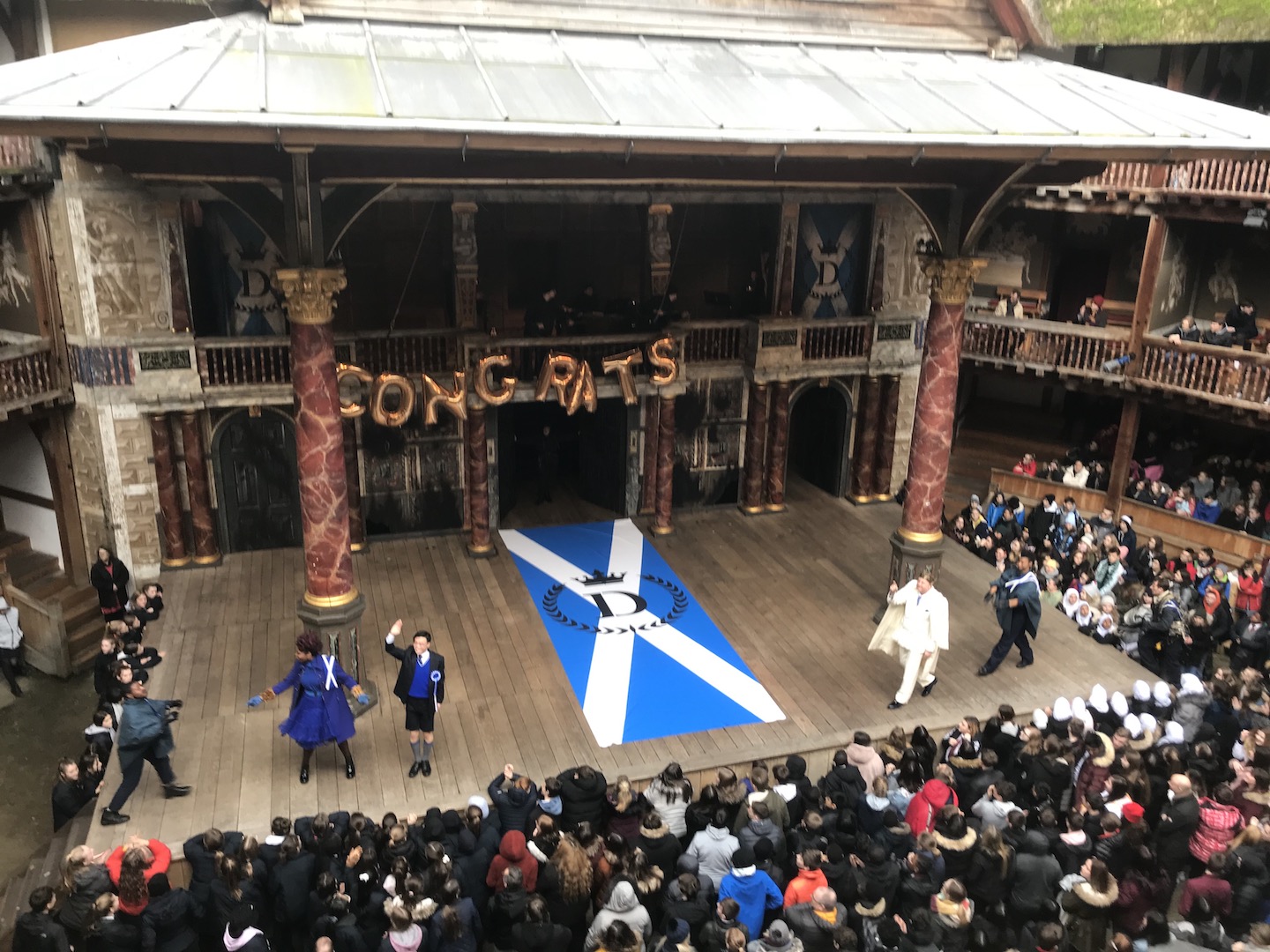 What did GCSE students make of their authentic Shakespearean experience of Macbeth at the Globe theatre. We asked three of them.

I thoroughly enjoyed the contemporary adaptation of Shakespeare’s Macbeth as it revealed to me that the play is more than just a bank of quotes to memorise. It was refreshing to see a play I had analysed so deeply in the classroom come to life, in the historic theatre it was originally intended for. Not only did such an experience help me with my essay writing, especially when referring to ‘audience response’, but it also reminded me of some of the play’s complex and more subtle themes.

I thoroughly enjoyed the contemporary adaptation of Shakespeare’s Macbeth as it revealed to me that the play is more than just a bank of quotes to memorise.

I was particularly intrigued by the presentation of Lady Macbeth, who began the play with child, which she later lost at the beginning of Act 5, an interesting theatrical device used to show her downward spiral into a guilt-driven insanity and eventual suicide. The play also featured multiple entrances from the stalls, confetti cannons and a golf buggy, all of which brought hilarity to the performance, an idea that had previously never crossed my mind.

There were aspects of this adaption that I personally disagreed with. For example, the addition of Lady Macbeth warning Macduff’s family of their imminent murder, an unnecessary attempt to create sympathy for one of the most wicked and blasphemous characters in the play. Nevertheless, as a learning opportunity I give the experience full marks. Now whenever I read my own copy of the play, I see it through the eyes of both a student and a member of the audience.

The play had been shortened to 90 mins which for me made it more intense and engaging, especially for a predominantly younger audience. Furthermore, the play was set in a modern-day era. This allowed me to see the play from a different perspective.  I thought the modern setting worked well though there were some parts that didn’t make sense such as the characters all had swords.

The play had been shortened to 90 mins which for me made it more intense and engaging, especially for a predominantly younger audience.

I thought that the actor who played Macbeth was very good as he played a character who throughout had many emotions running through him, all of which he portrayed very well. Another character I enjoyed was the gate keeper. She brought a comical aspect to typically a very dark play. This contrast was a relief from the dark events taking place on stage and allowed the audience to laugh and truly enjoy themselves.

The production  had its ups and downs. At times it was very enjoyable. Who could forget Act 6 Scene 1 where everyone broke into song and dance? I thought that the acting was mainly of a high calibre and even at the very top of the Globe Theatre each actor delivered their line with enough power to be heard.

They kept on mixing modern-day items with a predominantly medieval setting and I’m not too sure it worked very well.

However it was far from perfect: they kept on mixing modern day items with a predominantly medieval setting and I’m not too sure it worked very well. At times the effect was funny but at other points it just sort of broke the atmosphere and broke the concentration of the audience. and left some parts feeling a bit off.

Overall an enjoyable worthwhile trip, despite its excluding one of my favourite lines which comes as the murderer stabs Macduff’s son: Murderer: ‘(Stabbing Macduff’s son) What, you egg!’ Macduff’s son: ’He has killed me, mother. Run away…